As October is welcomed with its sweet rainy weather, I cozied up at home drinking coffee and watching films. Hence, this roundup is a longer one. Before you get reading, I just want to mention that I may have to stop writing the roundups for the next few months. I am getting closer to my highly anticipated graduation and things have been busy in a nice way. I will, however, keep writing reviews for individual intermedia products that I like.

If you like reading posts like this one, consider getting me a coffee here. I write a lot faster with caffeine. 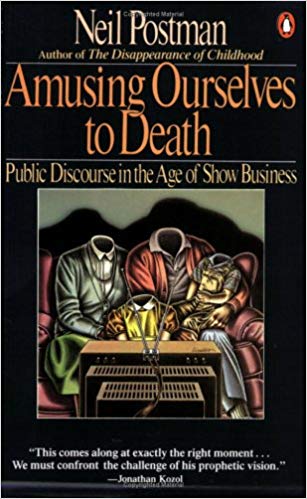 Amusing Ourselves to Death (1985) by Neil Postman

I have read snippets of Postman’s Amusing Ourselves to Death numerous times for classes throughout the university. I never had the chance to read the full book until I came across it in a second-hand bookstore this summer. It is a foundational book from Postman, the media theorist, and educator, that takes both Orwell and Huxley’s predictions about the techno-future and shows them under a clear lens for our eyes.

Part I sets up the importance of epistemology; in other words, the information about how media come to our lives is just as important as how we engage with it. There is invaluable information about the history of typography here. Postman wants to make sure we know the difference between how things were, and how things are. While we retained important information then, we get trivial knowledge that is worthy of a few quick seconds now. Hence, the news does not mean anything; people die on TV, and we get over it. In Part II, Postman digs deeper into the social components of our lives and how they are represented on TV. He talks about religious shows that are drained out of their spirituality to entertain a wider audience and keep their attention for long periods, too. He, then, talks about politicians as actors on TV and strongly despises it. He argues, TV strips the political content out of its history and ideology. Lastly, he argues that TV as an education gadget cannot work simply because it lacks interaction. When education becomes an entertainment toy, it stops educating.

In the final chapter, Postman decides it is time we stop flipping the pages and gives us the answer to the following question: Who is prepared to take arms against a sea of amusements? He does not suggest we eliminate TVs altogether, but de-mythologize them, break them apart and be aware of their purpose as the amusement objects that they are. This book is one that needs to be read a few times because of its information-heavy nature. It is, in fact, a holy book for anyone interested in media. 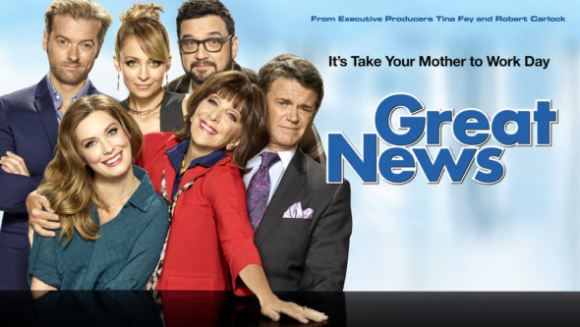 This is a very sweet, sweet sitcom that I came to love. I eventually clicked play simply because I was hoping to get a somewhat realistic look into a newsroom setting. I did not binge-watch the whole thing at one sit, but I could easily see myself doing that, too. The story seems to be about Katie but truly, it is about her relationship with her mother (Carol). Carol decides it is time for her to follow her dreams and starts going to journalism school while interning at the newsroom. The series tackles the workplace dynamics, power structure, and also the patterns of Katie and Carol’s mother-daughter relationship and how this looks within a workplace setting.

Season One mainly deals with Katie’s dilemma about having her mom around. We get to know all of the characters and decide who we like and who we probably won’t within the coming seasons. It is set up very well. On the other hand, what drives the story of Great News is the mother-daughter relationship, which actually may choke you up quite a lot (especially in the first season). In season two, we realize that Katie may have a love interest: Greg, the British producer. With that, there are numerous awkward scenes and anticipation that one of them will open up. Another bonus in season two is the guest appearance of the brilliant Tina Fey. Let me stop before I give too much away– in summary, this is a cute show to cheer you up but you may be sad to know that it is not cleared for another season with Netflix.

With its significantly larger budget of $50 million, Rambo could not attract enough viewers to fill the theatre seats (Box Office $60.3M). The question of whether Sylvester Stallone will retire from playing Rambo flew around for years. However, the vague interest wasn’t enough to find Rambo appealing once he was out of the war zone, as seen in Last Blood.

Why was Rambo simply bad? The legendary Stallone’s acting was not enough to hold a poor screenplay together. The screenplay of the fifth Rambo film has been a hot topic of Stallone’s interviews in 2018. Morrell and Stallone previously worked together on a soulful story for this last journey. Little did they know that the producers would prefer going with the version we saw on screen today. Hence, the human trafficking plot resulted in Stallone announcing his retirement from playing Rambo. You can read more about Morrel’s interview on the topic here.

Whatever happened today— Rambo is back, and the 2019 version of him fights alone to save his niece from the Mexican cartel. When she dies, Rambo turns his house into a war zone and attracts the cartel to fall into his vengeful trap. The cameras follow Rambo as he very explicitly breaks bones and sheds blood. There are a few lines here and there that seem meaningful, however, they are not articulated by Stallone. Personally, Rambo: Last Blood was a huge disappointment, and as I said, the mere presence of Stallone could not hold a poor film that is bound to be forgettable.

I remember coming across an audition call for Tall Girl and had to disregard it at the time. So, I was especially curious about Netflix’s new body [conscious or positive] chick-flick due to a brief personal association. A brief google search let me know that an upcoming streaming service HBOMax may have bigger plans for the Tall Girl lead, Ava Michelle, as she may be set to debut as the new Serena Van der Woodsen of the upcoming Gossip Girl reboot. Setting aside all the magazine-worthy information, Tall Girl targeted those below the age of 16 or so and likely inspired them a great deal. But let’s be real, it did not have the same effect on me.

The story is simple: Jodi is unusually tall for a high schooler, she gets bullied a lot and decides to see herself as a so-called monster as referred by the popular folks in school. Everything suddenly changes when a handsome exchange student moves to Jodi’s town. She, then, decides that she wants to be seen… especially by him. As a result, Jodi finds herself in an invisible battlefield against Kimmy aka the popular girl. Netflix’s Tall Girl does not differ much from similar productions rooted within the female power and body positive movements. It shares the storyline and characters of Netflix’s Dumplin’ but lacks the exceptional acting of Aniston and MacDonald; shares a similar message to I Feel Pretty but lacks the intensity or is less in your face, and it has hints of a Disney tale like High School Musical minus the music. In the end, we see Jodi wearing high heels (specifically, drag heels), dumping the handsome dude who does her wrong. Tall Girl addresses an unrecognized physical issue but does so in a vague and forgettable way. If you feel like being inspired, I recommend the slightly better film, Dumplin’ instead.

Just as we think Jlo’s epic return to the music industry (a couple of years ago) was a blessing, she arrives home to the chick-flick scene as well. While a movie that seems to be deliberately written for its lead actress does not have much cultural impact content-wise, it is nice to see Jlo bringing a touch of representation that’s been lacking on the screen. The film tackles a middle-aged woman’s (Maya) struggle in the career scene as a minimum-wage worker. Maya makes her way into a company with a fake resume. While we may think that the screenplay is set at this point, Maya then finds out about her daughter whom she gave up for adoption. The feel of the film changes as a whole– From following a woman stepping up the company ladder to a mother-daughter drama.

Overall, Second Act is a low budget film that did well in theatres because of its lead actress (Budget $16M, Box Office $60.3M). It simply reaffirms Hollywood’s disinterest in the romance plots these days and confirms the mother-daughter duos will be keeping our screens occupied. 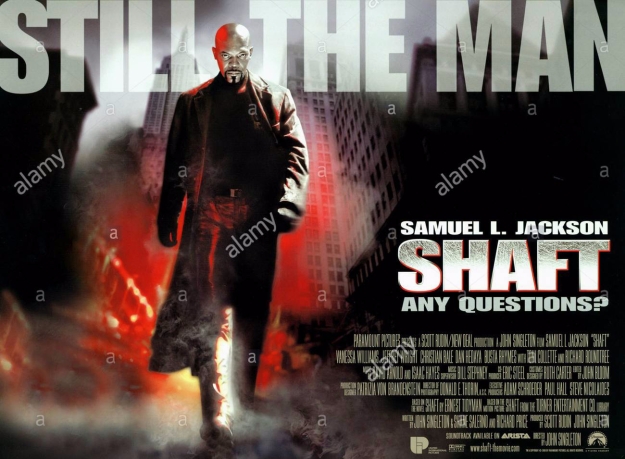 Hello, blaxploitation. If you do not know what I mean by that, blaxploitation is a genre characterized by its low-budget production values, stereotypical characters, and plots involving crimes and sex. But, most importantly, the films begin with the White men’s triumph against the Black hero. In the end, the blaxploitation heroes win their fight against the White men. Shaft (1971) was remarked to be one of the foundational stones of the genre. In the year 2000, John Singleton rebooted Shaft with Samuel L. Jackson taking the lead. Shaft (2019) recently visited the theatres with Jackson reprising his role. To note, I did not watch the updated 2019 version yet. However, I decided Shaft (2000) was a good place to begin.

First and foremost, Shaft (2000) begins with the legendary soundtrack. It then quickly follows John Shaft investigating a murder. In this scene, we recognize the Hitchcock method being subtly placed. There’s more information than the audience truly needs, and less than Shaft knows. The only witness, who is a scared White woman, succeeds to escape. The murderer, Wade Jr. (Christian Bale) is a rich, money-eating son; he gets released on bail. Wade teams up with the Dominican drug lord (Jeffrey Wright as Hernandez), who brings up a comedic component to the film. As expected, Shaft resigns from the police force and in the end, catches Wade Jr. solo. While Shaft is an older film, it does all things exploitation right. It also has a great cast who do well on characterization. I’ll try to follow up with the rest of the franchise and release an update that examines the strengths and weaknesses of Shaft throughout the years.

wake up and smell the humans

When an introvert speaks

In a world where you can be anything, be yourself.